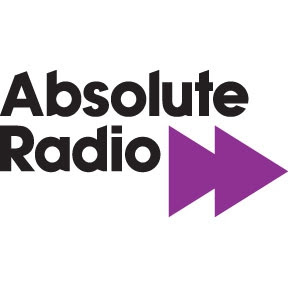 Clicking away at my computer, when an email came through from Nicky, saying she saw this and though of me. It was “Manbake” a yearly competition organised by Absolute Radio featured on the Christian O’Connell show.

The premise was simple, men who bake. They hosted three rounds of heats where various men brought in their home and self baked cakes.

And they would be judged by Chris himself, Maggie and Richie

The competition would be fierce as the rooms would be filled with metrosexuals who like to dabble in the kitchen.

So I said “why not”, and a few emails back and forth later, I was contacted by the show’s producer who gave me the instructions:

Bake a cake, decorate and bring it in the following morning for 8.00pm, the judging would be on taste, presentation and X factor.

So quick thinking Ben (me) was started racking his brains for the secret recipe that would blow the other cakes out the window.

Well my guess was so far my white chocolate and raspberry cheesecake has always been a winner, so why not have those ingredients in a cake, although I did think of making a cheesecake, didn’t want to tempt faith as the competition was called Manbake, not Manchill. 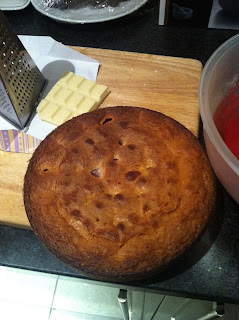 Dashed home after work and on my way made a quick stop at Sainsbury’s to pick up the ingredients I knew I wouldn’t have at home.

Quick dinner first, had a pork, red Thai chilli with rice and spinach for dinner, caught up on food network for more inspiration, typical no baking shows on as yet. 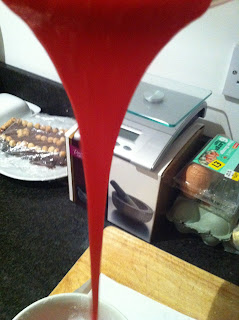 So oven on, cooker on, water boiled, chocolate melting, weighing, mixing, whisking, folding, pureeing, sieving, greasing, in the oven for 45 minutes. And most important bowl licking, it does bring back childhood memories

Cake out and chilling, 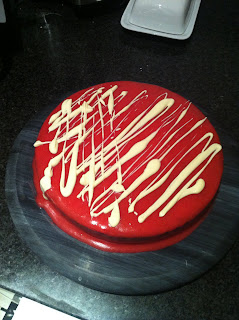 Then the raspberry frosting and drizzle with more melted chocolate.

Woke up early the following morning, couldn’t find a cake box anywhere, well oversized cake tin over cake and cling filmed safely carried in my gym bag and off to central .

Met my friend and fellow chef Sebastian in the lobby of the radio station, and we were taken up to the waiting area, till they ushered us in to the DJ booth

It was just both of us featuring in today’s heat, and as chefs we were pretty nervous, nothing more embarrassing than a chef who messes up the food, our reputations are on the line.

The moment of truth, Sebastian was up first, after slicing and plating and tasting, his cake blew them out of the water, I was getting extra nervous. Then I was up next. By the way, Chris said I had a smooth voice and I should be a radio DJ. Hmmm change of career maybe????

Richie started the scoring , and I was given 5/5 for presentation, 5/5 for X factor, but was given 1/5 for taste. 1 out of 5 WHY? Well he said because he doesn’t like almonds, he didn’t even taste the cake, just the frosting. With pleading from the other judges, he changed his mind and tasted the cake, and changed his score form 1/5 to 5/5, I almost screamed “get in there”, after the other two judges totaled all the scores we both looked confused, and then the scores were revealed, I had lost by half a point. My consolation was mine was the second highest of the week, just lost to a worthy opponent.

Well I am still happy and blessed for the opportunity. Manbake 2012, I am coming back with a vengeance.

Ps. Sebastian was cheated out of the win the following day

So here is the recipe for the cake.

1. Preheat the oven to 180ºC and base-line and butter a deep 18cm cake tin. Melt the chocolate over a pan of hot water. Beat the butter and caster sugar until fluffy then stir in the eggs one by one. Fold in the flour, salt and the almonds, then once thoroughly combined, stir in most of the melted chocolate (you need to leave about 1 tablespoon to drizzle).

2. Tip into the prepared tin. Take 100g raspberries and poke these into the surface all over. Very gently smooth over with a spatula so the batter almost covers the berries. Do not worry if some poke out.

3. Bake in the oven for about 45 minutes, covering loosely with foil for the last 10 minutes. Test for readiness by inserting a wooden cocktail stick; it should come out clean.

4. Invert on to a wire rack to cool. Purée the remaining raspberries then push them through a sieve to eliminate the pips. Beat in the icing sugar until smooth. Once the cake is cool, spread the icing over the top. Re-melt the chocolate if necessary then drizzle over top in zigzags or straight lines.